There has always been much debate within the windows & doors industry regarding the best way to reduce noise pollution from entering homes. We have certainly noticed that more and more homeowners every year are contacting us for advice on how to achieve this, as they try to make their homes quieter and more comfortable to live & sleep in.

Anybody that lives close to a main road, an airport or has noisy neighbours will tell you how disruptive it can be to suffer from the effects of noise pollution. We have always welcomed the opportunity to help people to use our products to improve their lives as well as their properties.

One of the reasons why homeowners may have become more concerned about this issue could be the recent publication of a study that suggests that living near to heavy traffic increases the risk of dementia; something Scientists have previously tried to prove for many years.

A common assumption is that it is better to have a triple glazed unit as opposed to a double glazed unit on the belief that having another layer of glass will be beneficial in preventing noise from travelling through the window from outside to inside.

However, evidence suggests otherwise. We know from test evidence that the introduction of a third layer of glass can in some instances actually increase the problem in that the third layer is actually just another piece of material that can vibrate; and more vibration = more noise.

So if the solution is not Triple Glazing then what is it?

We believe that a better solution is to use a special ‘acoustic laminate’ glass in a double glazed unit. The acoustic laminate layer is actually made up of three components – two pieces of 3mm glass with a PVB Polyvinyl Butyral) interlayer sandwiched in-between them.

Test evidence from experiments conducted in laboratories suggested that this combination would be better at reducing noise levels. Of course, the real test is in customer’s homes.

We have found that in instances where customers have requested triple glazing to reduce sound levels, that they have experienced good results overall. However, we have also had experience of customers who feel that triple glazing has not had the desired results. By switching triple glazing to an acoustic laminate has indeed produced markedly better results.

Our experience reflects the test evidence, therefore in instances where noise reduction is important we now advise that clients should consider installing double glazed acoustic glass ‘Finesse Shield’ rather than triple glazed units. We also advise that this unique glass can only be fitted into Finesse Windows as this is the only way we can be sure it will fulfill its sound reducing qualities.

The importance of fitting:

Having invested in noise reducing glass it is vital to ensure that the window in its entirety is fitted correctly so that the window can perform as intended. All our fitting teams are MTC accredited and are regularly inspected by FENSA. We also have our own Installations Supervisor who ensures each installation meets our own high in-house expectations.

Other benefits of Shield Protection Glass over Standard Glass: 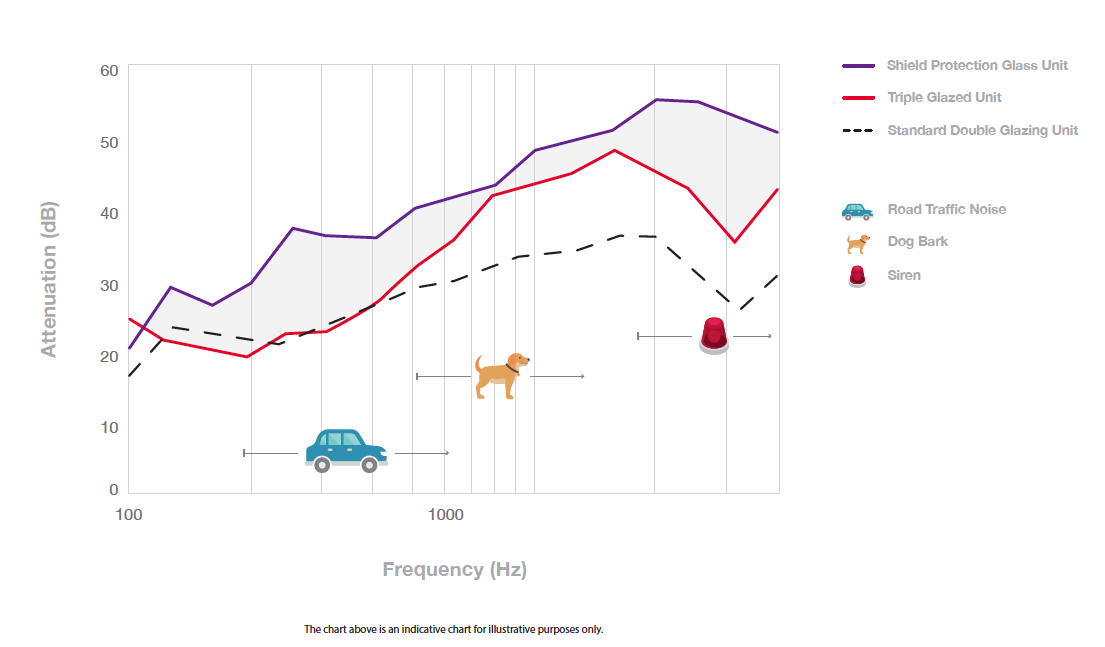 Disclaimer: The information contained in this graph is a general description of our product benefits and Finesse Windows hereby disclaims all liability arising from any inaccuracy in or emissions from the graph and all the consequences of relying on it.

GET AN ONLINE WINDOW QUOTATION

GET AN ONLINE DOORS QUOTATION

If you have any questions on the benefits of Shield Protection glass by Finesse, please call one of our team on 0121-451-3724 or pop into our showroom and speak to one of our Design Experts.

Image was added to your mood board

Due to Covid restrictions, we are currently not allowed to Book Showroom visits. Please choose one of the other options and we will contact you ASAP.

The safety of our customers and our staff is paramount. We continue to follow all current Government legislation and adapt our processes accordingly. We are continually working alongside our Health and safety advisers, FENSA and HSE advice to ensure that our Covid Secure procedures are effective and compliant.

As it stands we are able to offer the following services for all of our products within the Covid rules currently set out:

Please click here to see all our published rules and processes to keep everybody as safe as possible whilst we undertake our work.

We would like to thank all of our customers for your understanding and support whilst we are working through this challenging time – we will all get through this together.